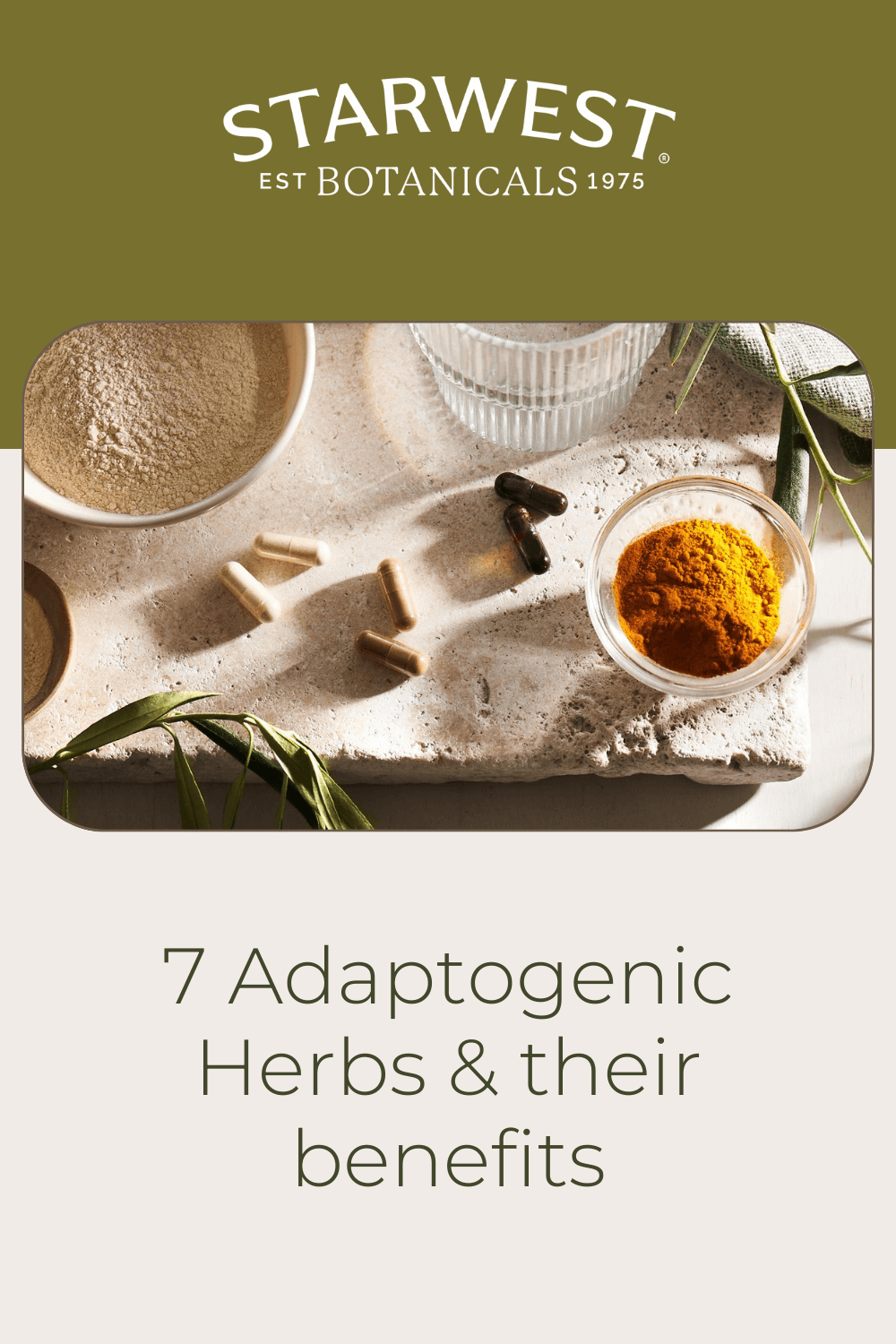 Traditional medicine in many cultures focuses on a whole-body approach to wellness. For example, traditional Chinese medicine is centered upon the idea of yin and yang—two opposing forces that need to be unified and balanced. On that premise, if someone is feeling overtired or stressed, their yin and yang may be out of balance.

We now have modern science to help us understand ourselves, but the holistic principles of traditional medicine still hold true. For centuries, humans have understood that certain plants and botanicals can have restorative effects on a human body that’s out of sync.

While these remedies have been in use for thousands of years, modern medicine only recently gave them a name: adaptogens.

Adaptogens are commonly defined as naturally occurring substances that help regulate the body’s systems. They are active ingredients in plants and mushrooms that may positively impact specific stressors when consumed. The benefits of adaptogens are different depending upon the plant.

According to experts, there are three key qualities that botanicals must have to be considered adaptogens:

How Do Adaptogens Work?

As mentioned above, adaptogens work to restore your body to homeostasis. That’s not so different from traditional Chinese medicine of yin-yang balance. Basically, adaptogens are though to work by either increasing or decreasing certain chemical reactions within the body, thus allowing you to center your mind and body.

Adaptogens can be consumed by:

As with any medicine, it’s important to consult with your doctor before taking adaptogens. Also, be sure to adhere to each adaptogen’s recommended dosage and to immediately stop taking them should an allergic reaction occur. 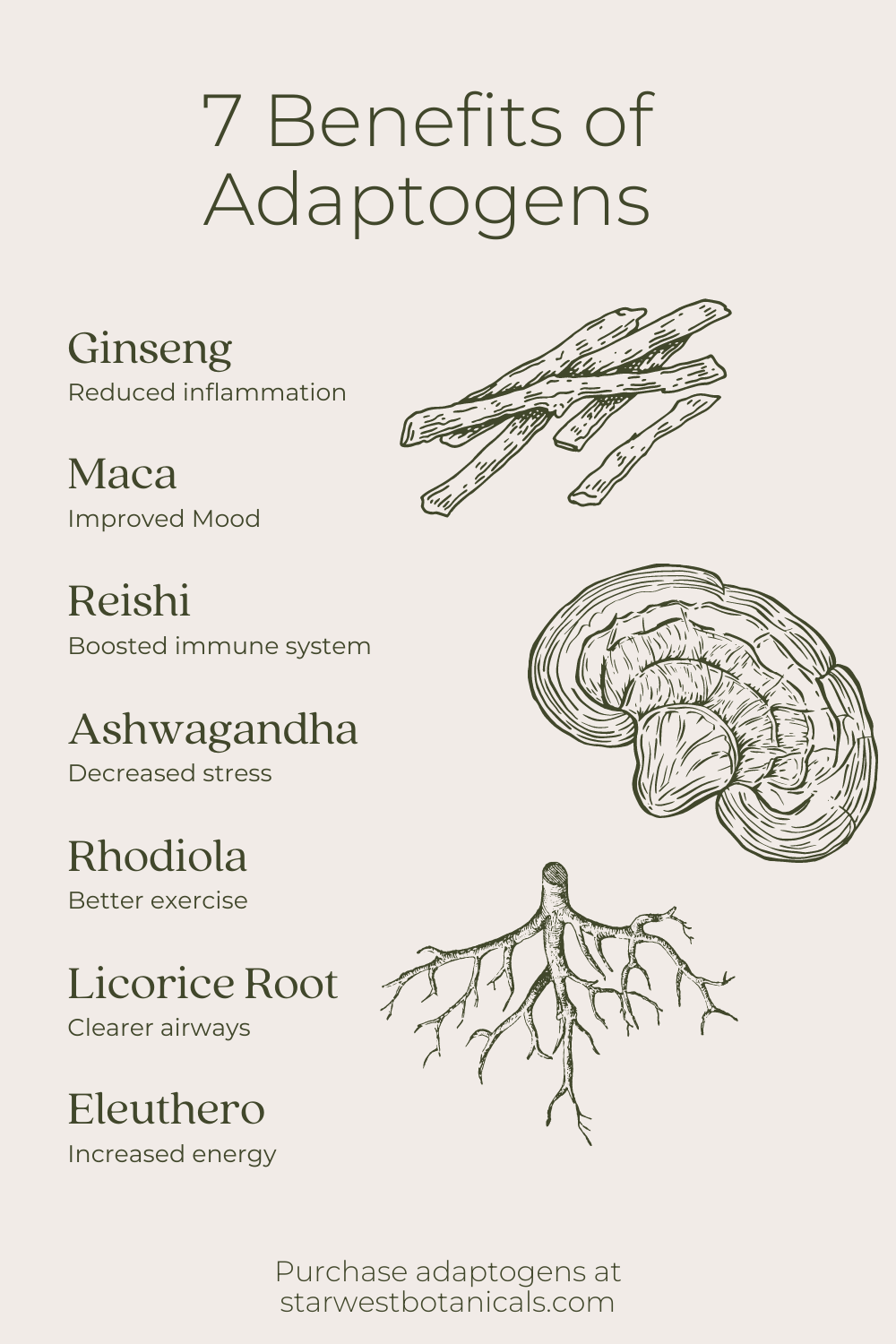 Adaptogenic ginseng comes from the root of the ginseng plant, which grows naturally in many mountainous areas in places like China, Korea, and even the United States. The roots are typically hand-picked and then processed.

This adaptogenic herb is one of the most versatile adaptogens. Studies have suggested that consumption of ginseng can have the following health benefits:

Sometimes referred to as “Peruvian ginseng,” maca isn’t actually in the same botanical family as ginseng. The maca vegetable resembles a radish in appearance and grows exclusively in the Andes region of Peru.

The root of the maca plant has long been used as an adaptogen and maca root powder is said to have the following health benefits:

Reishi is an adaptogenic mushroom native to warm parts of China, Japan, and other Asian countries. The mushrooms are known for their woody exterior and shiny tops, almost like they have been polished.

Organic reishi mushroom can be consumed whole or ground into a powder and the best way to consume reishi mushroom powder can be in forms such as capsules, teas, smoothies and more. There are many health benefits of reishi mushrooms including:

Known as “Indian Winter cherry” or sometimes as “Indian ginseng,” ashwagandha is an evergreen shrub native to India, the Middle East, and Africa. While the bush produces flowers and berries, it is largely the plant’s roots that are coveted for their adaptogenic properties.

Ashwagandha has long been used in traditional Indian medicine. Studies have shown that it may have the following benefits:

Everyone is probably familiar with licorice-flavored candies, but extractions from the same plant also have adaptogenic qualities. Today, the perennial herb is mostly grown in Greece, Turkey, and parts of Asia. While many believe it to be the same as fennel or anise, licorice root is actually part of a different botanical family.

Licorice root is more than just a sweet flavoring. As an adaptogen, it is thought to have the following potential benefits:

Much like ginseng, eleuthero is a plant that has been used in traditional medicines for thousands of years. Often called “Siberian ginseng,” although it doesn’t share any botanical characteristics with ginseng, this thorny shrub grows in the mountainous regions of Asia.

One of eleuthero’s other nicknames is “devil’s root,” but don’t be intimidated. This adaptogen has numerous potential health benefits:

The flowering plant is known for its yellow flowers and is commonly called “golden root” or “arctic root.” Rhodiola grows in extremely cold, harsh conditions.

More than just a pretty plant, Rhodiola extract may have the following adaptogenic benefits:

Find Your Balance With Starwest Botanicals

Maybe you’re searching for a way to bring down your stress levels after a tiring day taking care of the kids. Or maybe you’re seeking an improved focus for your next big work project. Or perhaps you just feel out of sync—too much yang, not enough yin.

The adaptogens available at Starwest Botanicals could be the extra help you’re looking for.

At Starwest Botanicals, we’ve been sourcing quality herbs, spices, and natural products since 1975. From organic Chinese ginseng powder to organic reishi mushroom, we have the ingredients and the experience to help you on your journey toward homeostasis.

Wiley Medicinal Research Reviews. Evolution of the adaptogenic concept from traditional use to medical systems: Pharmacology of stress‐ and aging‐related diseases.