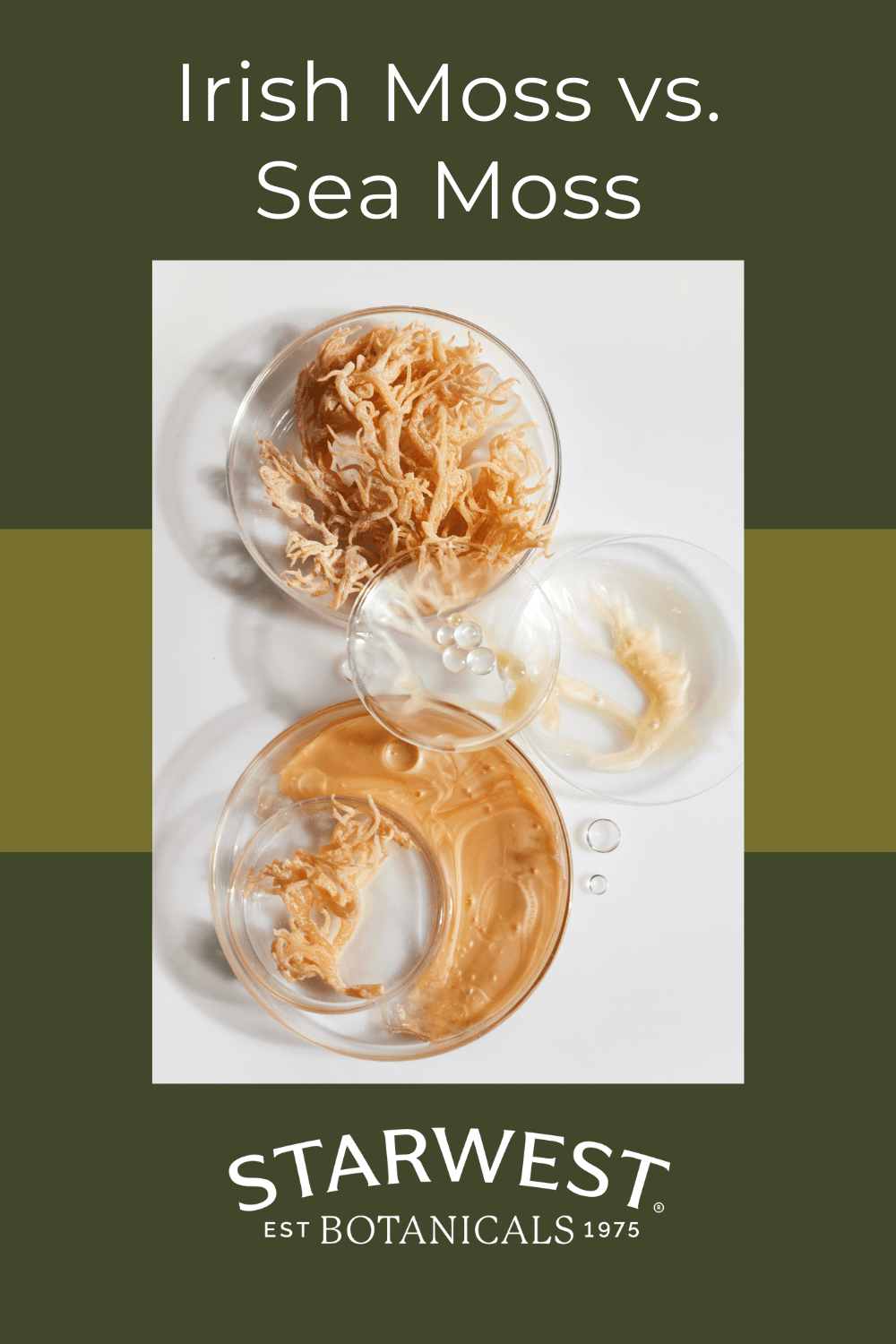 You’ve heard that sea moss can serve as a fantastic addition to your herbal supplement routine. During your research into the qualities and uses of sea moss, you may face a question: what’s the difference between Irish moss and sea moss?

When comparing Irish moss vs sea moss benefits and how the plants are classified, there’s one essential piece of information you need.

While there are some practical differences, sea moss and Irish moss are typically terms used interchangeably to describe the same plant, Chrondus crispus.

Let’s take this naming game back to bio class.

In the world of botanists and floraphiles, sea moss is a general term for red algae, a kind of aquatic plant with over 6,000 associated species. So what is Irish sea moss? Chrondus crispus is a variety of sea moss but is most commonly referred to as Irish sea moss or in Gaelic "carraigín" (anglicized to carrageen).

Most likely though, if you’re looking at a supplement or powder that advertises sea moss, it contains Irish moss. That’s because Irish moss is the most common kind of sea moss harvested for consumption.

While it’s commonly called moss and is taxonomically sorted as a type of algae, Irish moss is practically identified as a seaweed or sea vegetable. So if you were wondering what sea vegetables are, some variations tend to be used interchangeably. It naturally occurs in coastal waters of the Atlantic ocean, growing on rocks in the shallows. It ranges in color from deep purple to yellow-green, and grows in short tufted fronds.

The Irish have harvested carraigín along their rocky coastsfor hundreds of years. Irish moss is a dense source of nutrition that helped sustain the population day to day, and was especially important as a source of food during the Irish potato famine in the middle of the 19th century.

Genus Gracilaria, the Other Sea Moss

There are thousands of types of red algae in the ocean today, but two kinds are commonly used in herbal medicine and food production—Irish sea moss, and Jamaican sea moss (genus Gracilaria).

Jamaican sea moss grows in warmer Pacific and Caribbean waters (as you can probably gather from the name). It’s found naturally on rocks, but it can also be farmed on top of water-bound rope systems. It grows in long tendrils with small fronds, and can be found in a variety of colors, though it’s usually gold or purple.

Jamaican moss and Irish moss share a lot of the same applications. Their main differences are in how they look amnd where they grow in the ocean. 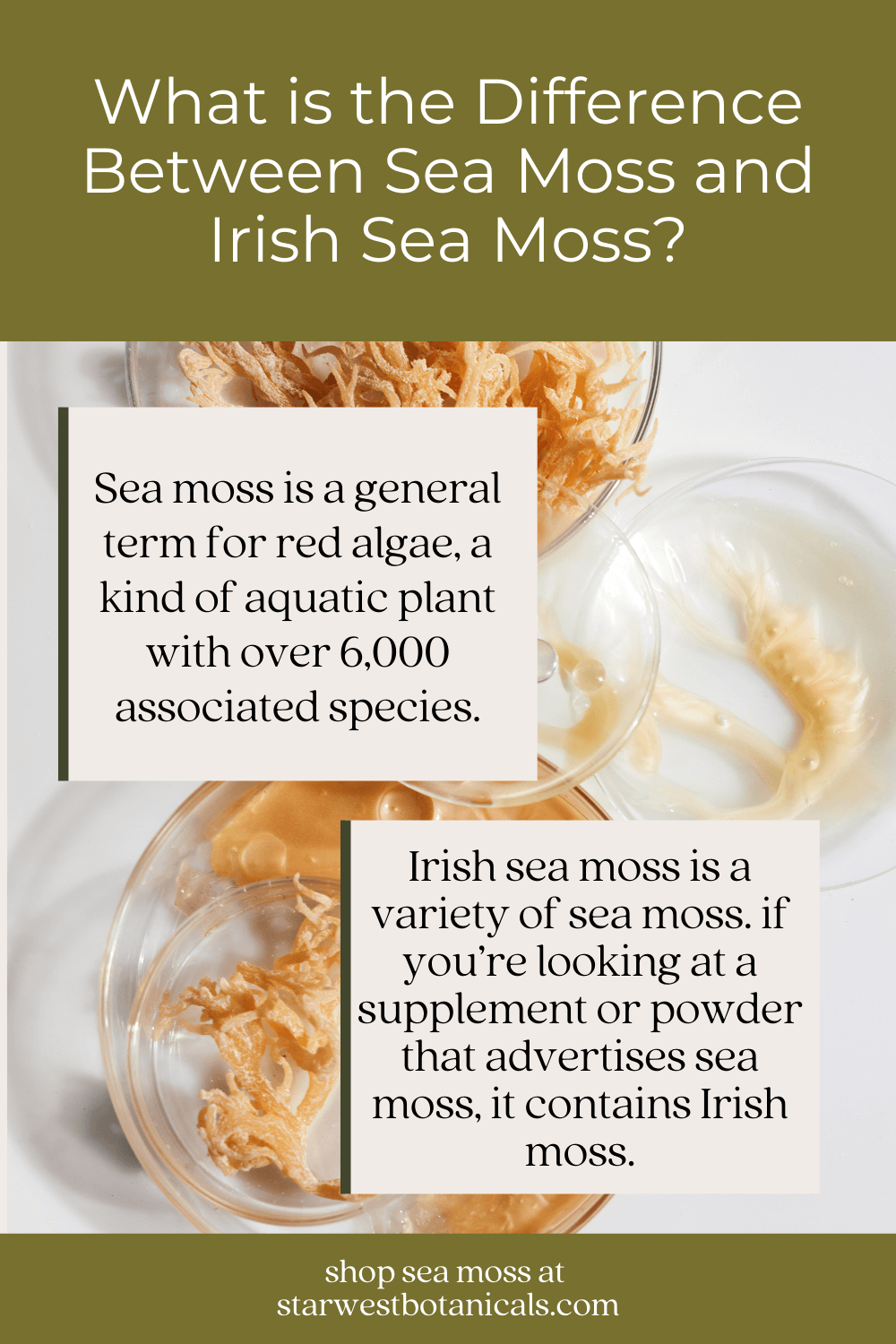 The Uses of Irish Moss

Irish moss has been relied upon for centuries as a source of nourishment. Today, scientific studies have found that the organic Irish moss may have myriad benefits for health and wellness:

Irish moss can be utilized in a multitude of ways. Here are the three most common uses (all of which you can apply to great effect in your own home):

Starwest: Your Trusted Resource for Any Herbal Need

Whether you’re searching for information on sea moss or buying it in bulk, Starwest Botanicals is happy to help. We’ve been sourcing and providing high-quality herbs and spices for almost fifty years, and during that time we’ve made a habit of adapting to our customers’ needs.

Whatever your healthcare goals, trust Starwest to light your way to a more nourished lifestyle.

If you're looking for Irish sea moss, check out our selection of Irish moss powders and supplements.

Allure. Why You Should Consider Adding Sea Moss to Your Skincare Routine. https://www.allure.com/story/sea-moss-skin-care-benefits

National Library of Medicine. Components of the cultivated red seaweed Chondrus crispus enhance the immune response of Caenorhabditis elegans to Pseudomonas aeruginosa through the pmk-1, daf-2/daf-16, and skn-1 pathways. https://pubmed.ncbi.nlm.nih.gov/24056462/